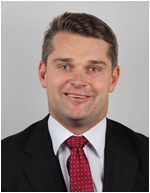 Dr. Simon Nothling specialises in Medical Retina and Uveitis. He graduated from the University of New South Wales in 2001 with First Class Honours. Prior to his Ophthalmology training, he worked for 4-5 years as a Medical Senior House Officer in Australia and the United Kingdom in various medical specialties, such as Rheumatology and Neurology.

He began his general Ophthalmic training in 2009 at Sydney Eye Hospital, which lasted 4.5 years. After his training in Sydney, he then undertook a Medical Retina and Uveitis fellowship at the world renowned Moorfields Eye Hospital, London.

This fellowship lasted 12 months during 2013/14. At Moorfields, he gained considerable experience managing medical retinal conditions such as Age Related Macula Degeneration, Retinal Vein Occlusions and Diabetic Retinopathy, as well as Uveitic and inflammatory conditions of the eye. Simon has also been involved in various large international ophthalmic trials during his time at Moorfields.

Outside of work, Simon is a very keen sportsman. He played club rugby union in Sydney for quite a few years, and is a recent Australian surf swimming champion. Surfing is also one of his passions and he has surfed some of the best surf breaks in the world. He has also worked voluntarily as a doctor in some of the remote islands of Indonesia and Fiji.