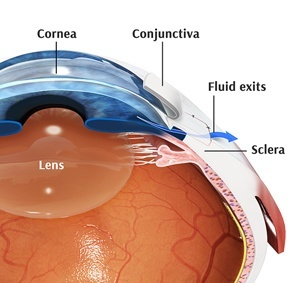 Glaucoma surgery involves either laser treatment or conventional surgery in which a cut is made in the eye to reduce intraocular pressure (IOP) for preventing further vision loss or blindness.

The goal of glaucoma treatment is to decrease the pressure in the eyes. This is achieved using special eye-drops or medications. Surgery is recommended if medications don’t yield the desired result, or with an aim to prevent further vision loss or blindness. Depending on your particular situation, surgical options include:

Trabeculectomy: Trabeculectomy is the most commonly performed surgical procedure to reduce intraocular pressure in the eyes with glaucoma. It involves the creation of a new drainage channel that allows the fluid to drain from the inside of the eye to a space under the conjunctiva leading to the formation of a fluid filled space termed the “bleb”. The drainage site may scar over time leading to its closure and subsequent elevation in eye pressure. This scar formation can be prevented or minimised by using antimetabolites during and after surgery. These act by inhibiting the multiplication of cells that form scar tissue.

Express Shunt: This is a modified version of a trabeculectomy. This procedure uses an extremely small metal shunt to divert intraocular fluid in the same manner described for trabeculectomy. To date, evidence suggests outcomes are very similar to trabeculectomy.

A number of surgical techniques are classified under this heading including deep sclerectomy, viscocanalostomy and canaloplasty. The common feature of all these types of surgery is the lack of full-thickness incision in the inside of the eye. Instead, they aim to open and expose a structure called Schlemm’s canal, a circular passage that travels for 360 degrees around the front of the eye near the junction between the cornea (clear front part of the eye) and sclera (the white part of the eye). They lower intra-ocular pressure by increasing the flow of aqueous through the natural pathways of the eye as well as via a mechanism very similar to trabeculectomy (described above). These surgeries are only likely to work if the angle between the iris and cornea is open. Therefore, glaucoma in which this angle is closed should not be treated with this type of surgery.

Deep Sclerectomy: This technique is similar to a trabeculectomy, except no full thickness drainage channel is created. Instead the dissection opens into Schlemm’s canal, but leaves the trabecular meshwork intact. Fluid from within the eye then flows across the trabecular meshwork and is then dispersed along Schlemm’s canal, under the sclera and into the “bleb”. The intraocular pressure reduction achieved is slightly less than a trabeculectomy, however, the speed of recovery after surgery is often quicker and it has a different complication profile. For example, cataract and chronically low intraocular pressure (hypotony) are less frequent following deep sclerectomy.

Viscocanalostomy: a clear jelly-like material called viscoelastic is injected into Schlemms canal in an attempt to dilate it and increase the rate of fluid flow along it. This can be performed as stand alone procedure or in combination with other techniques such as deep sclerectomy.

Known as MIGS, minimally-invasive glaucoma surgery is a new and evolving area of glaucoma surgical treatment. It aims to lower intraocular pressure with a procedure or device that is minimally invasive and has little or no effect on the surface layers of the eye. All MIGS procedures have the following characteristics:

MIGS is best suited for eyes with mild to moderate glaucoma or ocular hypertension with an open angle in whom an intraocular pressure in the mid to high teens is desirable. MIGS can also be helpful in reducing the need for topical glaucoma medication.

Two MIGS devices are currently approved for use in Australia:

Hydrus: This device is approximately the size of an eyelash and is made of a metallic alloy called Nitinol. Via a small incision in the cornea it is inserted into Schlemm’s canal in the iridocorneal angle. There is an opening at one end through with fluid from the anterior chamber of the eye can flow into Schlemm’s canal then leave the eye via the natural outflow pathways.

iStent: This device measures 1.0mm x 0.3mm, is made of titanium coated in heparin and has a similar shape to a snorkel. It is positioned via a small incision in the cornea into Schlemm’s canal in the iridocorneal angle. The opening at the end that lies within the anterior chamber allows fluid to flow directly into Schlemm’s canal and then leave the eye via the natural outflow pathways.