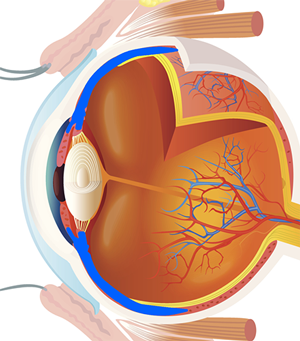 Glaucoma is the slow damage to the optic nerve at the back of the eye, which carries visual messages from the retina to the brain. This damage can result from a number of factors, the most common being an increased pressure inside the eye (intraocular pressure – IOP). If this pressure has no identifiable cause, it is called primary glaucoma.

Anatomy Of The Eye In Relation To Glaucoma

The space in front of the lens contains a clear watery fluid (the aqueous), and behind the lens the eye is filled with a clear jelly (the vitreous). The watery compartment is divided into two, the anterior chamber, which is in front of the iris, and the posterior chamber, which is behind the iris but in front of the lens structure. The aqueous is constantly produced and secreted from the inner surface of the ciliary body into the posterior chamber, and passes through the pupil into the anterior chamber, where it is normally able to leave the eye through a drainage system called the trabecular meshwork. The balance between the fluid entering and leaving the eye determines the eye pressure, known as intraocular pressure (IOP). There are several ways in which the flow and drainage of this fluid can be obstructed. The increased pressure can eventually cause damage to the optic nerve.

Anatomy Of The Eye In Relation To Uveitis

The iris is the coloured portion of the front of the eye. It forms the pupil, which is the aperture that regulates the amount of light entering the eye and reaching the retina to enable sight.

The uvea (or uveal tract) is the pigmented or coloured layer of the eye. It consists of the iris, the ciliary body (which produces a clear fluid inside the eye known as aqueous humor), and the choroid, which lies behind the retina and provides an essential supply of blood and nutrients to it. When the uvea becomes inflamed, the condition is called uveitis. Specific parts of the uvea may be inflamed giving iritis, cyclitis and choroiditis. However, structures surrounding the uvea may also become involved in the inflammatory process, such as the retina, optic nerve and the lens.

Iritis (Anterior Uveitis): This is inflammation of the iris and is the most common form of uveitis. The ciliary body may also become inflamed. Iritis usually lasts for a few days or weeks and commonly recurs.

Intermediate Uveitis (Cyclitis or Pars Planitis): The pars plana is the flat part of the ciliary body.This type of uveitis affects the area behind the ciliary body and can extend to the retina. Also, it may be associated with multiple sclerosis.

Posterior Uveitis (Choroiditis): This is inflammation of the back of the eye and can also affect the retina. Recurring episodes may last for months and sometimes years. Choroiditis is often caused by infections such as toxoplasmosis.

Panuveitis: This is a diffuse form of inflammation of the entire uveal tract.

Uveitis may cause an inflamed eye which is often painful, uncomfortable, watery and sensitive to light. Vision may be blurred with black spots (floaters) in the field of vision.

Ocular pain is common in acute anterior uveitis affecting the ciliary body. Intraocular pressure may be significantly elevated with severe eye pain. Ocular pain associated with elevated IOP is often experienced as brow ache and is referred to the brow on the affected side.

Blurred vision can be due to glaucoma, uveitis or complications associated with uveitis.

Visual disturbances such as photophobia and haloes may be associated with iridocyclitis and swelling of the cornea (corneal oedema).

Floaters are common in posterior uveitis.

Small pupil. A smaller than normal pupil size is common in iritis. Eye drops may be used to dilate the pupil as treatment.

There are many causes of uveitis. It may result from infections due to bacteria and viruses (e.g. shingles, mumps, herpes), parasites (toxoplasmosis), or fungi. It can also be an autoimmune response where the body’s own immune system reacts against the body. This is commonly associated with systemic diseases such as lupus and arthritis. An injury to the eye can provoke uveitis, and also severe injury to an eye can result in inflammation of the opposite eye.

Increased pressure can eventually cause damage to the optic nerve. The upper limit of ‘normal’ is generally taken to be 21mmHg. Uveitis can result in elevated IOP in several ways. Eye pressure is maintained by aqueous humour, which is continually produced by the ciliary body and drains from the eye. Often inflammatory cells can block the trabecular meshwork and therefore reduce the drainage of aqueous. Inflammatory cells and sticky protein can create abnormal adhesions between the iris and the lens (posterior synechiae) which can interfere with the normal drainage of aqueous, by blocking the flow of aqueous between the posterior and anterior chambers and causing forward ballooning of the iris and leading to raised pressure inside the eye. Adhesions may also develop between the iris and cornea (peripheral anterior synechiae), blocking the trabecular drainage meshwork. Acute trabeculitis, involving inflammation and oedema of the trabecular meshwork may result in a reduction in the structure’s ability to drain the aqueous from the eye. Also, treatment of uveitis can lead to raised IOP. Although corticosteroids can be effective in relieving inflammation, prolonged administration can result in elevated IOP. Corticosteroids increase IOP by decreasing aqueous outflow. Stopping or reducing the drops will lower the pressure, but eliminating the inflammation is far more important in the long run. However, once uveitis resolves, glaucoma may persist if drainage structures were permanently damaged by the inflammation.

The aims of treatment are to
1. suppress the inflammation and relieve discomfort
2. minimise the risk of scars and to prevent vision threatening complications e.g. glaucoma, macular oedema, retinal detachment.
3. reduce the eye pressure

Treatment is first aimed at effective control of the inflammation. Different medications are used to control the original cause of the uveitis, if known, and to minimise the inflammation itself.

Suppressing the inflammation is attempted with the use of steroid medications with names that often end in ‘-one’, ‘-zone’ or ‘-sone’ for example FML (fluoromethalone), prednisone and Maxidex (dexamethasone), and non-steroidal anti-inflammatories e.g. ocufen. Corticosteroids may be used to minimise the inflammatory process. They may be administered by injection to the eye, by eye drops, or as an oral medication depending on the location of uveitis. Eye drops are often used for anterior uveitis. Injections and oral medication are used for posterior uveitis or panuveitis. Use of drops in the eye must be delayed if there is damage to the cornea (e.g. ulcer) because corticosteroids can prevent the healing process or may lead to further damage.

Dilating ointments or drops (e.g. tropicamide, homatropine, atropine, cyclopentolate) widen the pupil and relax the muscles within the eye. This helps to relieve pain and stop the inflamed iris sticking to the lens. These medications may not be indicated if glaucoma is present as it may further decrease the fluid drainage from the eye and lead to increased pressure.

To reduce eye pressure timolol, betoptic, trusopt, alphagan, iopidine and/or diamox may be used. If medical treatment has been unsuccessful, surgical therapy may be considered. However, surgery is usually delayed until the inflammation has been quiet for at least 3 months If eye pressure is difficult to control, an operation such as the insertion of a drainage tube e.g. molteno valve implant may be necessary, or a trabeculectomy (whereby a new drainage channel is created) may be performed, usually with anti-scarring medications such as 5FU or mitomycin-C.