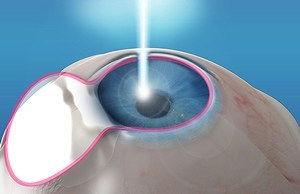 Refractive surgery is an ophthalmic surgical procedure useful in correcting refractive errors of the eye such as near-sightedness (myopia), farsightedness (hyperopia), astigmatism, and presbyopia. A successful refractive eye surgery provides clearer sharper vision, and can be an alternative to glasses or contact lenses.

Refractive surgery reshapes the transparent dome-shaped front part of the eye (cornea) and focuses the light traveling through the cornea to the retina situated in the back of the eye. Most of the vision correction surgeries work by reshaping the cornea, though some may require replacing the natural lens of the eye.

There are different types of vision correction surgeries. Based on your eye examination, your eye doctor may recommend any of the following surgeries to improve your vision: